You are here Home » 5 Reasons to Find a Local Church

As I went through our Visitor Connect Cards following a recent Sunday Service, it was somewhat surprising to read this statement, but at least they were telling the truth.

We also have an area someone can select “looking for a church,” but that wasn’t selected because they were just “church hopping.”

What sounds like an exciting venture in checking out what other churches are doing can soon become a lonely endeavor as each and every church is critiqued (and criticized) as not being entirely up to par for a long-term relationship.

The Bible tells us in Hebrews 10:25 (NKJV) 25 not forsaking the assembling of ourselves together, as is the manner of some, but exhorting one another, and so much the more as you see the Day approaching.

What are a few good reasons for finding a local church and becoming faithful to it?

Perhaps this is one of the reasons people would rather not find a home church! They would prefer to just kind of “wing it” through life and hope at the end, things will turn out just fine.

We all like to believe that we don’t really need anyone else but God, but let’s face it, we need one another not only to be encouraged in times of difficulty but even to have a corrective word (in love) shared as we get off track.

The Bible also says: Proverbs 27:6 (NKJV) 6 Faithful are the wounds of a friend, But the kisses of an enemy are deceitful.

“Who would prefer a friend’s wounds to an enemy’s kisses? Anyone who considers the source. A friend who has your best interests at heart may have to give you unpleasant advice at times, but you know it is for your own good. An enemy, by contrast, may whisper sweet words and happily send you on your way to ruin. We tend to hear what we want to hear, even if an enemy is the only one who will say it. A friend’s advice, no matter how painful, is much more valuable.” Quoted from Life Application Study Bible.

Another great reason to stop “church hopping” and settle into a home church is for those “landmark moments” of life.

As Joshua was leading the people into the Promised Land, he made sure that a Landmark was left behind so that future generations would hear the story of God’s faithfulness and guidance.

Joshua 4:20-22 (NKJV)
20 And those twelve stones which they took out of the Jordan, Joshua set up in Gilgal. 21 Then he spoke to the children of Israel, saying: “When your children ask their fathers in time to come, saying, ‘What are these stones?’
22 then you shall let your children know, saying, ‘Israel crossed over this Jordan on dry land’;

Having a home church makes it possible for moments such as Baby Dedications, Water Baptisms, Salvations, Weddings and Funerals to be held in a place which allows beautiful stories of God’s faithfulness to be told.

As a Pastor, I often receive phone calls from someone “looking for a church to have a wedding”. While many churches have very different policies regarding weddings and costs, etc., it’s always much less awkward when a faithfully attending couple call with such a request.

While the “landmark moments” can be remembered wherever they happened, it’s doubly exciting as families can worship together and point out where their “twelve stones” are in the church they attend.

Come to the church where all the perfect people are! Well, I don’t know what church you worship at, but that’s just not the case ANYWHERE… never has been, and it never will be this side of heaven.

This is where “the rubber meets the road” so to speak. We meet someone in a church and begin to feel great connection as we might enjoy watching the same sports teams, be on the same spiritual level, have children the same ages, etc.

But then… the offense.

This is the testing time and inevitably will happen in any relationship that develops over time. It’s in those times that not only are relationships severed, but once again, the “hopping” starts as they decide to move on to another church where they “won’t’ get hurt.”

John Bevere has written a tremendous book on “The Bait of Satan” to help people get through these times of offense.

What marriage doesn’t have a few tests along the way? It’s much the same way in a church, but if people would just hold on through those times, there would be far more victories than defeats!

Take time to develop relationships and realize that things happen but rarely does it rise to the level of moving along to the next church.

It is absolutely fantastic to see people step up and volunteer during times of crisis! I’ve watched, as I’m sure you have the countless tragedies that unfold such as natural disasters and it seems people can’t do enough for their friends and even neighbors they don’t even know.

When it comes to volunteering in the church for various ministries, perhaps the urgency of the moment doesn’t seem to be there as much as it seems that simply being faithful week to week can feel like a “rut.”

There is something incredibly satisfying about reaching out with talents and gifts, and just a caring heart to be a blessing to someone else. I’ve had numerous times of going to minister in a nursing home or hospital through song or spoken word. Yet, upon leaving the building, God has found ways to minister to ME through those very people!

The local church should set the pace when it comes to volunteering not only at the church itself but within the local community. It’s exciting when a group of volunteers from the church team up to bless the local Fire Department or EMS companies with cases of water or sports drinks. Recently, we dropped off a case of Gatorade to our Fire Company and found out they had a call that very night. When they arrived back at the Station, ice cold Gatorade drinks were waiting for them.

Where would our churches be without volunteers? Stop “hopping” and get involved!

5. MORE EFFECTIVE FOR THE KINGDOM

I’m not sure who first coined the phrase “we’re better together,” but it’s an absolute fact!

Ecclesiastes 4:12 (NKJV) 12 Though one may be overpowered by another, two can withstand him. And a threefold cord is not quickly broken.

Matthew 18:19 (NKJV) 19 Again I say to you that if two of you agree on earth concerning anything that they ask, it will be done for them by My Father in heaven.

While we might feel we can handle things ourselves, it’s important to remember we can’t really be all that effective as “lone ranger Christians”.

The word “synergy” comes to mind which means the following:
“the interaction or cooperation of two or more organizations, substances, or other agents to produce a combined effect greater than the sum of their separate effects.”

In other words, we will be far more effective for the Kingdom of Christ when we join together in unity and purpose than if we decide we’re the only one who knows how to get the job done correctly.

A symphony is only beautiful to listen to as each person plays the instrument they are gifted to play and does so in a way that blends with the others.

Life will be far more fulfilling when we are thinking of being a blessing to others instead of always looking for “what’s in it for me.” Find a local church and get involved even if “they” are imperfect! 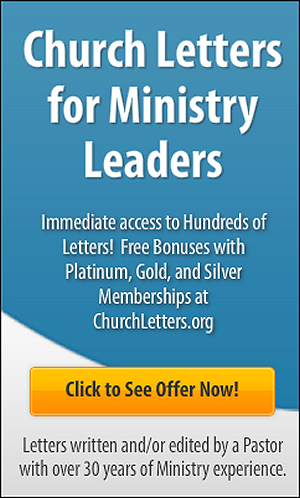 Join Now for UNLIMITED IMMEDIATE ACCESS to over 1,000 Church Letters and Church Welcomes!  Keep your Membership current for continued access to new and compelling letters and welcomes to use within your church.  Just “copy, paste, modify and send!”  Blog Reader Discount!  Use the coupon code "10OFF" for $10 off Platinum Membership.