About a month ago, we came across a graphic that was so powerful we shared it on our Facebook page and in turn, as of this writing it has 583 shares.  Evidently there something about Ministering to the Minister that struck a nerve.

Without a doubt, this grap 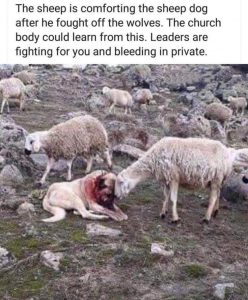 hic was one that many leaders as well as laity identified with and wanted to get the message out about the need to “minister to the ministers.”

1 Peter 5:2 (NKJV)2 Shepherd the flock of God which is among you, serving as overseers, not by compulsion but willingly, not for dishonest gain but eagerly;

While we are not the originators of the graphic, we were able to find the source of the picture as far as we know, and it is here.

The story is presented in a way to reflect well on animals, and while there is nothing wrong with that, those in ministry know it speaks of a far deeper meaning.

While the dog being comforted is not the “shepherd” of the flock, in reality, the dog does represent the shepherd who is working hard to protect and minister to the flock. I've even heard that the dogs watching over a flock could also be representative of deacons or elders who are doing their best in partnership with the shepherd to protect the flock.

As we know, illustrations such as this can only go so far. Within this one picture, far more than a thousand words are spoken to those who are in ministry leadership today.

Also, we realize not ALL of those entrusted with the care of the flock is in it for the right reasons and at times can be out of order themselves. For the most part, though, I have found in my experience in ministry that the vast majority of Pastors and Church Leaders have a great desire to help and protect the flock God has placed in their care.

Here are a few thoughts, and please know that I write as a Pastor with over 35 years of ministry experience, serving as a Youth Pastor, Associate Pastor and for many years now, as a Senior Pastor.

No one is looking for pity. It is important to know that ministry leaders have “skin too.” Some thick and some thin, but for sure, it is the skin of human beings.

Many Pastors and Spouses have been hurt by people over the years who didn't start with the plan to be hurtful. Perhaps it was an invitation to a meal at home or restaurant and things just seemed to “click.” Conversation flowed easily as the men connected and were oblivious to the discussion of their wives as they too, connected emotionally and spiritually.

It seemed a friendship was forming and even in ministry moments there was the sense that community was a bit stronger as they knew they could connect. All the while, a little voice in the back of the Pastor's head or heart was saying “be careful.” Again, the fellowship was sweet as time passed quickly while enjoying one another's company.

Then it happened. The offense came in one form or another. We could spend a while describing many of the ways it could happen. Most Pastors have a plethora of stories to relate, and yes, at times it could even be their fault.

Quite often the dynamic of friendship is far different in this type of friendship as apologies are made and perhaps accepted, but things aren't the same. The hurt was too deep and before long, the friendship has dissipated and quite possibly, the friends have left the church.

Ministry Leaders have a life too.

One of the most significant challenges for any young leader is knowing they need to devote time to the ministry if it is going to grow spiritually, numerically, and financially. (Not necessarily in that order).

An even greater challenge is when the leader begins to not only lead a church but lead a young and growing family at the same time. Ministers tend to forget that this little congregation made up of sons and daughters and spouse is their first priority and not the last.

Often, when a leader begins to get their priorities together which is God first, family second, and congregation third, many well-meaning people (hopefully well-meaning and not just mean) will remind the leader who pays their salary. I have seen too many children of leaders who grew up in the church want nothing to do with God because all they have ever known is being less of a priority as the leader has determined other things or people to be more important.

Do you know of ways we can be better at Ministering to the Minister?

Share your thoughts below and please remember to be kind. 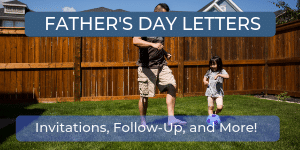 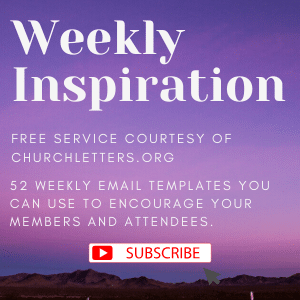